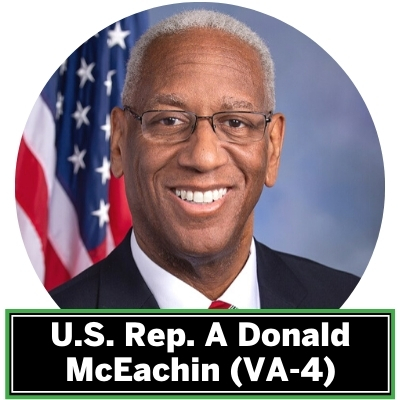 A. Donald McEachin represents Virginia’s Fourth Congressional District in the U.S. House of Representatives. A longtime state legislator and former chair of the Virginia Senate Democratic Caucus, he was first elected to his current office in 2016. He sits on the House Committees on Energy and Commerce and Natural Resources, the Select Committee on the Climate Crisis and serves as Vice-Chair of the Sustainable Energy and Environment Coalition. During his first term in Congress, Rep. McEachin co-founded the United for Climate and Environmental Justice Congressional Task Force and continues to lead the task force as a co-chair.

People, cities, and states across the country, including Virginia, have committed to a clean economy, and Rep. McEachin is leading the fight in Congress to ensure the federal government does the same. To put the U.S. on the path to a 100 percent clean energy economy, last Congress, Rep. McEachin introduced his 100% Clean Economy Act of 2019, which sets a nationwide goal of achieving a 100 percent clean economy by 2050. Supported by over 160 of his colleagues last Congress, the Congressman’s 100% Clean Economy Act of 2019 would protect public health and our environment; create high-quality clean jobs and strengthen our economy; mitigate the worst impacts of climate change for all communities and all generations; and restore the U.S. as a global climate leader.

In the U.S. House of Representatives, Rep. McEachin has also led the fight to protect all people’s fundamental right to clean air, pure water and an environment free of dangerous levels of toxic pollution. Recognizing that the people most affected by environmental injustice have not had a meaningful voice in the decision-making processes impacting their well-being, McEachin began a multi-year collaborative effort with hundreds of impacted communities to draft his landmark Environmental Justice for All Act, legislation which comprehensively addresses the long-standing environmental inequities that harm low-income communities, communities of color, and Tribal and indigenous communities across the country.

Rep. McEachin looks forward to carrying forward his work towards a sustainable future for all and the ongoing fight for bold, inclusive environmental justice solutions in the 117th Congress.

Rep. McEachin graduated from American University with a degree in Political Science and from the University of Virginia School of Law. In May of 2008, he received his Master of Divinity from The Samuel DeWitt Proctor School of Theology at Virginia Union University. Rep. McEachin and his lovely wife Colette, the Richmond City Commonwealth’s Attorney, are the parents of three adult children.